Life Happens, And So Does A Congressional Race

If anyone gets the meaning of a favorite saying of Beau Biden's, it is Lisa Blunt Rochester, one of the Democratic candidates for the congressional seat.

"Life is what happens when you're making other plans," Beau used to say.

Then within a year, Rochester's athletic and health-conscious husband shockingly died, and so did Beau, and John Carney, the Democratic congressman, switched to running for governor.

It meant there was unexpectedly an open race for the congressional seat, which hardly ever comes open, and maybe even more unexpectedly, there was no front-runner for the office, which has passed virtually seamlessly since 1982 from Tom Carper to Mike Castle to Carney.

Along with Nature, politics is right up there with abhorring a vacuum. Candidates have been lining up for the congressional race like it is a political Powerball jackpot.

As constant as the unavailability of Delaware's lone spot in the U.S. House of Representatives has been, there is something even more constant, and that is the makeup of the federal delegation.

In 227 years of congressional history, the state has never been represented by someone who is not white and male.

Rochester, as an African-American woman, is neither, unlike anyone else in the congressional race. In a crowded field, it can become notable.

With the flip of the calendar to 2016, the campaigning is getting serious.

A major test comes at the end of the month, when federal campaign finance reports are due. Townsend, a state senator, has already made a move to break away from the others with an early announcement he has collected more than $200,000 in contributions, a respectable amount.

Rochester is just about set to make her run official by filing for office late next week and formally declaring her candidacy at a campaign event on Saturday, Jan. 23, in Wilmington.

"It is about giving people opportunity. What are we now looking to do as a state to reinvent ourselves?" Rochester said.

There has been nothing ordinary about the way she got here, as she tells it herself.

Politics runs in the family. Ted Blunt, her father, used to be the Wilmington Council's Democratic president, and Marla Blunt-Carter, her sister, was an aide in Joe Biden's Senate office as well as the state director for the Obama-Biden campaign.

While at graduate school in 1987, Rochester went to a town hall meeting hosted by Carper, then the congressman, and got to talking with him. He mentioned his office had internships available, so she applied and was accepted, and then one thing led to another.

Rochester worked for Carper as a constituent caseworker, went to the governor's office with him as a policy adviser and wound up in the Cabinet as the Labor secretary. When Carper was elected as senator and Ruth Ann Minner as the new Democratic governor in 2000, Rochester stayed in the Cabinet as the personnel director.

She was recruited away to run the Metropolitan Wilmington Urban League, and she met Charles Rochester, an engineer working in China. After a largely long-distance courtship, they married and she went with him to China in 2006.

It was far away, and Lisa Rochester was out of politics -- so much so that she did not vote in 2006 -- but she was drawn back to it by Obama and got involved with rallies and fund raising with other expatriates for the presidential campaign in 2008.

Then Charles Rochester, healthy and vigorous at 52, took a business trip to St. Louis and ruptured an Achilles tendon while he was there. After surgery, he was recuperating when he developed blood clots in his heart and lungs, and the doctors could not save him. He died on Sept. 25, 2014.

Lisa Rochester decided on Sept. 25, 2015, a year to the day after Charles Rochester died, she would run for congresswoman. Because the way forward in life is to put public purpose in her plans.

For those of you who just don’t get it, why we’re on this planet, I feel sorry for you. I pray for you. But I want… https://t.co/54hrONGfFq

For those of you who just don't get it, why we're on this planet, I feel sorry for you. I pray for you. But I want you to know you will not steal our joy.

@Deaf4Biden @TeamJoe @JoeBiden Of course! And thank you for all that you for accessibility. https://t.co/fJ42yXBJsT 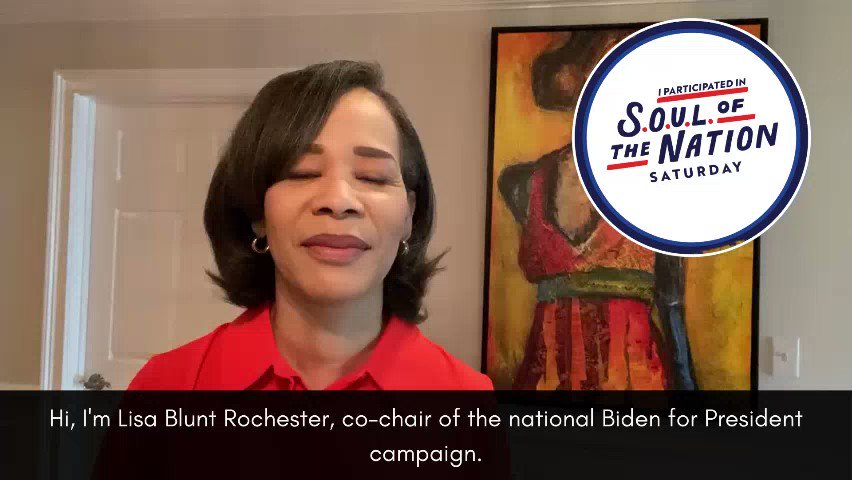 One year ago, today, Joe Biden launched his campaign to restore the soul of our nation. One year later, in the face of crisis, we've seen the best of what the American people have to offer. Let's say Thank You on this #SOULSaturday Visit http://JoeBiden.com/SOULSaturday to join us.